Women Ahead of Their Time, CIC, Cambridge, United Kingdom.

Abstract: HexagonFab is a University of Cambridge spin-off company incorporated in 2018. The company is developing small-scale bench top graphene-based sensors for the analysis of biomolecules to accelerate pharmaceutical R&D. Their first product measures the binding kinetics between molecules, which is critical for the development of novel prescription drugs. HexagonFab is revolutionising this field by offering an affordable plug and play product able to run an entire experiment in as little as 30 min.

Since its discovery in 2004, graphene – a monolayer of carbon atoms arranged in a planar hexagonal lattice – has been touted as a wonder material that would revolutionise modern technology with its superior mechanical and electrical properties. However, after a decade of research and millions invested, this dream never fully materialised.

Many attributed this issue to the difficulties surrounding the manufacture of graphene-based devices, which primarily use methods adopted from the semiconductor industry. At first, the highest quality graphene came from ‘mechanical exfoliation’ – a strategy that used adhesives to remove individual graphene layers from graphite crystals. Not only was this manual process labour intensive, it also yielded small quantities of the material without any uniformity in shape. If this was not challenging enough, researchers then had to manually ‘transfer’ these microscopic flakes onto silicon substrates for continued processing into a useful device. Indeed, this process was not compatible with the highly automated manufacturing procedures of semiconductors.

After a decade of little progress, many started to lose hope in the grand revolution of nanomaterials. Even with the introduction of chemical vapour deposition (CVD), which allowed researchers to ‘grow’ monolayer graphene on catalytic substrates in a reaction chamber, there remained the ever-pervading challenge of transferring the material onto another substrate without introducing defects or contamination. No one could find a way to achieve this transfer in a way that could be cost-effective for large scale production.

There was another problem that stunted graphene from commercialisation: producing nanomaterial devices in large quantities would require foundries; however, introducing a new process into a foundry was expensive and, naturally, foundries were reluctant to invest in such infrastructure and equipment without the guarantee of a relatively large customer base. In turn, without collaboration with the foundries, many companies were unwilling to invest in nanomaterials research.

These are the multitude of problems that faced Ruizhi Wang when he started his PhD with Prof. Stephen Hofmann at the University of Cambridge in 2014.

For the next two years, Ruizhi experimented with various methods for improved integration of nanomaterials. In the process, he built a custom reaction chamber that incorporated a high-power laser to improve the production of graphene. This new method allowed him not only to produce graphene with higher quality, but also in a way that enables easy and industry-compatible manufacturing.

HexagonFab was then incorporated and Ruizhi started selling his graphene prototype devices to researchers in the UK and US. Meanwhile, knowing that capital is needed to grow the business, Ruizhi started applying for various governmental translational grants and business competitions.

In need of a partner, Ruizhi reached out to a trusted friend, Christoph, who was working as a consultant for McKinsey & Company in Zurich at the time. Christoph and Ruizhi met a few years earlier as interns at McKinsey. Sharing the same interest as entrepreneurs, they had already worked together on a previous business: a website for directing outdoor enthusiasts to top travel destinations in Switzerland, earning revenue from the hotel and suite bookings through their website. In initial conversations, Ruizhi described the potential and the capabilities of his graphene devices, but also admitted that besides the academic market, there was not a clear large-scale application. Having done many consultancy projects in the pharmaceutical industry, Christoph immediately saw that these novel devices would be an ideal sensor platform for the analysis of biomolecules in pharmaceutical R&D. He joined as a new co-founder in a reinvented HexagonFab, with now a clear application market for the graphene device technology.

The company started to gain traction over the next few months. The team flew to Germany to present their business plan as part of the third annual Displaying Futures Award competition sponsored by Merck. Out of 97 applicants, HexagonFab was selected as one of three winners and received a monetary prize to further their product development [1]. Four months later, HexagonFab was selected as the winner of the Emerging Technologies Competition, sponsored by the Royal Society of Chemistry, in the category ‘Materials and Enabling Technologies’ [2]. Other notable prizes include an Innovate UK grant for translating academic research into a commercial enterprise, an Enterprise Fellowship from the Royal Society of Engineering [3], and a first-place award at the Corporate Challenge of AMS [4], one of the leading sensor manufacturing companies in Europe.

HexagonFab Bolt is a sensing device composed of field-effect transistors powered by a single atomic layer of graphene. The sensor is able to detect changes in electrical current over time that result from the binding of charged biomolecules to a functionalised graphene surface (Figure 1).

4. The journey so far

With new funding coming in, it was now time to expand the team. At the beginning of 2019 Ruizhi hired a recent engineering graduate, Lukas, who would become primarily responsible for fabricating the devices for testing. A few months later, HexagonFab hired another recent graduate, Brice, who had just completed his PhD dissertation in surface chemistry. With this small team, HexangonFab was ready to start accelerating its R&D programme.

The next few months were critical for the survival of HexagonFab. While Brice developed new chemical functionalisation strategies for the device, Ruizhi and Lukas worked to optimize the device architecture and fabrication protocols. At the same time, Christoph was out searching for investors and potential customers, researchers in the pharmaceutical industry who needed a more cost-effective option for measuring the binding kinetics of drug molecules, an important metric for assessing the performance of new therapeutic compounds. In the lab, the team was making progress and able to demonstrate the capabilities of their prototype.

Christoph had found several researchers who were interested in the product and willing to use their proprietary molecules for pilot projects. In order to do this, however, the team needed to package the device in an easy-to-use form factor and provide the supporting tools to perform an experiment in the field. With a month till their first scheduled demo, the team worked around the clock to prepare the prototype – Lukas assembled the electronics for the processing unit and packaged the device into a custom-made cartridge that used a USB connector to transmit the analogue signals, while Brice optimised the target molecule localization to the surface. In the two weeks leading up to the demo, Ruizhi and Lukas worked tirelessly to redesign the software interface.

Ruizhi and Christoph packed up the prototype and flew to Switzerland for their first customer demo at the end of 2019. On site, Ruizhi set up the prototype and added a buffer solution to obtain a baseline signal. With the baseline shown on the screen, the customer had three solutions with different proprietary biomolecules – the goal was to see whether the device could distinguish the relative binding affinities of each molecule and compare the results to the standard measurement technique. The prototype worked flawlessly.

Survival in a pandemic

With new momentum, Ruizhi and Christoph continued travelling to potential customers around Europe to demonstrate the capabilities of the first-generation prototype. With each successful demonstration, the team became more confident in raising capital to continue development towards a first product. Then, one week after the last customer visit, the government announced the nationwide lockdown for COVID-19. The day before the lockdown, Ruizhi and Lukas packed and transported all essential equipment to Lukas’s apartment, where they set up a temporary workshop to continue engineering development.

There was no time wasted at home: Christoph continued searching for investors; Ruizhi and Brice reworked the theory underpinning the surface chemistry and device architecture; Lukas redesigned the electronics and revamped the software. Towards the middle of the summer, with no end to lockdown in sight, Ruizhi started to look for new facilities to relocate the company. Within a week of learning about the Bio-Innovation Centre in the Cambridge Science Park, Ruizhi signed a lease and the team relocated all the equipment to their new office and lab space.

Finding investors is normally a difficult task, but convincing individuals to contribute large sums of money to high-risk ventures during a period of extreme economic uncertainty is another league. Nevertheless, Ruizhi and Christoph persisted in reaching out to investors across Europe. Every few weeks, another group of angel investors or analysts from venture capital funds would visit the team, learn more details surrounding the business plan, and the work in the lab. When Cambridge Enterprise agreed to invest, several other groups followed up to express interest. Over the course of a few weeks, the team gradually raised more and more interest towards their target investment.

5. Looking to the future

HexagonFab has a tradition of celebrating each major milestone with a bottle of Taittinger Champagne. On the label, the date is recorded along with a brief description of the achievement, and then everyone involved adds their signature. The team started this tradition after the first successful customer demo back in November 2019.

Where does HexagonFab go from here? The immediate next step will be to expand the team further with experts in electrochemistry and process engineering. Over the next few months, the primary focus will be on translating the prototype design to a fully realised product that can be delivered to the interested customers for use in drug discovery. Putting this technology into the hands of pharmaceutical researchers may lead to accelerated development of life-saving therapeutics and a proof-of-concept of successful commercialisation of nanomaterial devices.

I would like to thank the HexagonFab’s team and especially the Hardware Engineer, Lukas Vasadi, who kindly provided me all the materials and closely followed the writing of the article.

[3] Wang Ruizhi. “Dr. Ruizhi Wang from the Centre for Advanced Photonics and Electronics, has been awarded a Royal Academy of Engineering Enterprise Fellowship” University of Cambridge, 03 Jul. 2019, http://www.eng.cam.ac.uk/news/dr-ruizhi-wang-awarded-royal-academy-engineering-enterprise-fellowship, accessed: 20 Dec. 2020. 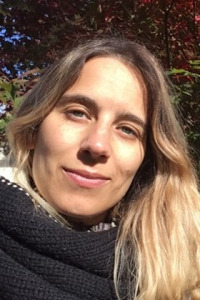 Iris L. Batalha is currently a Panel Tutor in Nanotherapeutics at the University of Cambridge Institute of Continuing Education and a Co-founder, Director and Editor-in-Chief at the non-profit organisation, Women Ahead of Their Time. In parallel, she is a freelance scientific consultant in innovation strategy at Inspiralia, Spain and USA. She received her PhD degree in Bioengineering Systems from the MIT-Portugal program in 2014. From 2014 to 2016 she worked between the Department of Chemical Engineering and Biotechnology, University of Cambridge, and the biopharmaceutical company MedImmune (currently AstraZeneca) on the development of spore-inspired excipients for antibody formulation. From 2017 to 2020, she was a joint Research Associate at the Nanoscience Centre and Molecular Immunity Unity, University of Cambridge, working on the development of nanobiotics to treat mycobacterial infections. Iris has been affiliated with Peterhouse College in Cambridge since 2018. Her research interests and expertise lie on medical and pharmaceutical research and development, particularly in the fields of nanobiotechnology, bio-inspired materials, downstream processing, formulation and drug delivery.

PharmEnable: unlocking chemical space and creating the medicines of the future